Changes in the Monetization structure of Bombergrounds: Battle Royale

Thank you for the great feedback over the past two months – while most of it has been positive, we’re always looking to make the game better. So we’re always listening!

Today we’re changing the Monetization structure of Lootboxes in Bombergrounds: Battle Royale, and we’re also updating you on what our roadmap for rewards- & monetization looks like going ahead.

2. The price of one Lootbox is changing from 25 Gems to 50 Gems to make up for the difference.

3. We’re merging the Artist Lootbox with the Premium one.

The price change will make it easier for players to collect the cosmetics that are available in the game for a reasonable cost, while also lowering the maximum amount of randomized outcomes that could happen.

Players should now feel at ease that when spending money on a Premium Lootbox, they’ll always receive something cool and new! 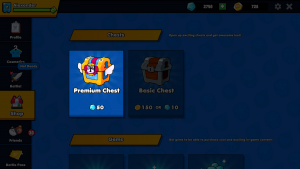 As we want to be as transparent as possible towards our players, we’re also going to give you a small roadmap below on what we believe will be future changes to the game. These changes have not been finalized yet, but they are things we’re working on.

Upgrade your cosmetics to a new style, or color, depending on the set itself. Some sets may have additional features when upgraded to their max level, or they may just have a difference in coloring.

However, upgrading them should make you stand out and look way more awesome than before, so it’ll definitely be something you want to check out.

Cosmetics will be upgradeable with both Gems & Bombercoins – whatever you choose to use.

We’re adding Daily Quests for users to complete once a day. These quests will give you rewards that are decided when the quest is given to you. Sometimes it’s more, sometimes it’ll be less, but every day should come with a new challenge.

We’re extending the possibility to get free rewards by playing the game daily for up to 30 days of attendance, when starting to play the game the first time.

Each day you log in to the game, you’ll get an attendance stamp in a 30-day calendar. Once you fulfill the 30 days, you’ll receive a big reward for being patient!

What do you think should be the final reward in the daily login challenge? Should it be a cosmetic set? Or something else? 🙂

A. Victory Dance Animations & Dance Emotes
This feature will make it possible to dance in the game, similarly to how you send an emote in the game now, you will be able to start dancing at will. You’ll have to be careful when dancing means you might get killed by other players when you rock your socks out. 🙂

The first Dance Emote you have equipped will also be used for the Victory Dance that you will be performing when you win a game!

B. Lobby Backgrounds
You’ll be able to change the character background in your personal lobby party slot. These backgrounds will be added to Lootboxes, and will be both static and animated, depending on their rarity!

C. Throne
This item will be used as a way to make your character elevated for example if it is standing behind a stone wall when performing your victory dance at the end of a game.

Now you’ll be able to show off your equipment in style, with awesome thrones that will be both cute & deadly (of course!).

D. Bat Charge Color
We know. Your favorite feature in Bombergrounds is the Batting mechanic – so we’re making it possible to change its color and effect. Isn’t that just great? 🙂

(ps. Shoutout to all the Batters still holding down the Bat-key as they’re reading this!).

E. Name Cosmetics & Borders
We’re adding possibility to collect and change the style of the Lobby Slot borders, and your Character Name. Such as changing color or achieving something in the game and getting a cool Lobby Slot border to show off to people that have yet to reach your enormous level!

13 thoughts on “Changes in the Monetization structure of Bombergrounds: Battle Royale”